Perhaps the best person in DC to speak with deep experience about school modernizations is Mary Filardo, executive director of the 21st Century School Fund.

It’s a great list. Council member Mary Cheh leaned forward in her seat and asked for explication as Filardo went through it.

But that same council hearing provided many examples of how far anything on that list has yet to be realized with our school modernizations.

For instance, Ellington’s renovation–and its large cost–sucked a lot of air from the hearing, with David Grosso, chair of the council education committee, committed to funding the renovation almost regardless of cost and others, including activist Peter MacPherson, pointing out that there has been no good accounting for enormous cost escalations in the project over the last two years.

A few days later, Grosso provided MacPherson via email an explanation of his support for Ellington. Grosso noted that DGS had replied to him back in April that within the 5-year capital improvement plan, the agency simply inserted placeholder numbers–and re-evaluated costs once the project was underway, thus leading to the current situation whereby the amount allocated is several orders of magnitude greater than what was originally budgeted.

To be sure, mere placeholder values for a project, however worthy and wanted, are difficult to reconcile with much different treatment at other schools–especially when there is no explanation for the (huge) disparity between placeholder and actual costs.

And there was certainly plenty of disparity mentioned at the council hearing. Adams Morgan resident Cynthia Pols testified about the Marie Reed school renovation (at 12:50 on the hearing video, available here) and how the reality of its use as school, health clinic, recreational facility, and early childhood center was never reflected in its renovation budget–only its use as a school was acknowledged and budgeted for. Pols spoke later of how DGS appeared almost “spiteful” when the community pushed back on the agency’s plans to ignore the actual usage of the facility.

Pols urged that the planning process be earlier for all schools, because SITs (school improvement teams) come into play only “after the fact” of budgets being set and scope of work determined.

Ironically (because of what transpired later), Pols also noted how the community itself has been shut out of the SIT process at Marie Reed, where the SIT meets in private, there are no minutes, the list of members is not disclosed, and there was no opportunity to apply to be part of the SIT. Even ANC commissioners serving on SITs become compromised, she added, because they then become no longer a neutral body to whom the community can appeal.

Shortly thereafter, DCPS COO Nathaniel Beers testified that SIT meetings are, in fact, public–and went on to note that a public meeting would be held the next day for Watkins Elementary, to get feedback from the community on a swing space for that upcoming renovation.

Trouble was, no one from DGS or DCPS actually told the Watkins community about the meeting (only the SIT was notified)–a clear violation of new guidelines that DCPS itself has promulgated for SITs. (Not to mention a complete reversal of previous public denials by both DGS and DCPS that swing space would ever be needed for the Watkins renovation–something that this writer is intimately familiar with, as my children have attended the school.)

Just two days after the council hearing, testifying at the DCPS budget hearing in the auditorium of Stuart-Hobson Middle School, Peter MacPherson took DCPS chancellor Kaya Henderson on a laser-pointer tour of that school’s recently renovated auditorium, showing where damage to new plaster is occurring in the same place where the old plaster had been similarly damaged for decades. An adjacent stairwell has similar water damage on its walls, and the school’s roof remains untouched.

Too bad there is no video of the DCPS budget hearing (or, as yet, an available transcript) to see the damaged wall or hear the testimony—but here is a picture for the record: 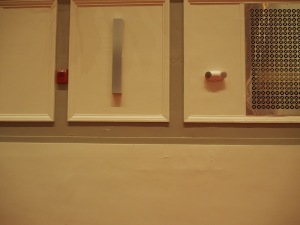 (Come to think of it, maybe Filardo’s list could use an eighth point: leaders of the school system being as painfully aware of, and proactive about, such modernization problems as the private citizens who both document and live through them.)

2 thoughts on “The 7 Habits of Highly Effective School Modernizations”