Herein debuts a new feature on this blog, showcasing communications sent to DC public officials about our schools that got utterly no response.

As in: no city leader addressed or copied hitting “reply” and typing “thanks” or “we’re working on it” or “see ya later, alligator!” or “OMG!!”

In this plea for help for DCPS’s Sousa Middle School, all of that was true. And none of the addressees or copied city leaders followed up with a call or text. (Oh, and none of the emails bounced.)

So read on: These are the people who run our public schools. And this could be your child’s school.

I wanted to write to you both as a fellow DC citizen as well as a DCPS parent.

Last weekend, I took the pictures of Sousa Middle School that I am sending here. I am writing to ask why this historic school appears to be suffering neglect.

That is: I would not want my 12-year-old middle schooler to attend a school with graffiti on it, as in the first picture below.

Nor would I want my 12-year-old to attend a school with an abandoned room with standing water, as in the second picture below.

That graffiti has been there for many weeks, and the standing water issue has been around for more than a year—I know, because I have been regularly around Sousa for years running, for sports activities.

In all of this, I ask that you please do NOT blame anyone at the school!

First, there are plenty of good people at Sousa—I know, because I have seen them in action. Well before 7 am on weekdays, for instance, there is a friendly guard greeting all passersby, including me, and ensuring the parking lot is properly attended. Last Saturday, a trash bag was broken open, its contents strewn across the back side of the school, but on Sunday, the bag and most of the trash were gone.

Second, the neglect I have seen at Sousa appears to be well beyond the power of anyone in that building to remediate. For instance, for play areas outside, there is the very bare minimum of a basketball court and a lone metal turtle statue in a weedy, damp, and trash-strewn depression. Despite the school having received a renovation, there is nothing else outside that indicates children—kids!—are having fun at all there.

Indeed, the deputy mayor for education (DME) recently put on her website an interactive map with DCPS utilizations and capacities (available here: https://dme.dc.gov/node/1265461). Sousa is shown on the utilization map with a 40% utilization rate and 255 kids enrolled (of whom 68% are in bounds, which is a relatively high in boundary capture rate). On this map, there is a note attached to the entry for Sousa, which says the following (boldface mine):

Thus, it appears that, in clear contradiction to the new strategic plan for DCPS around communication, a major change in a DCPS school (who uses the building; school programming) is being communicated to the public in a footnote on an interactive map on the DME’s website.

As you both know, this building is a reminder of a painful past in our city.

But its current neglect in the ways I have documented here is an all-too-vivid reminder of a painful present for many DCPS schools that serve the poorest kids in our city.

I do not know what that DME note I have put above means for a “partner” in Sousa, but I do know that a charter school co-location there would likely mean further loss of enrollment at Sousa (see this: http://www.huffingtonpost.com/2013/07/17/charter-school-co-location_n_3613540.html).

Moreover, charter advocates have consistently pressured the city to turn over closed and undercapacity DCPS schools for their purposes; KIPP alone has tried for years to have a new middle school in Ward 7, most recently floating a proposal to have a middle school close by, and with ties to, Nats Academy, which is right across the street from Sousa.

Moreover, the high in bounds capture rate at Sousa suggests that its underenrollment is partly a function of a decline in the local student population—not a function of its programming. And Sousa’s enrollment is inevitably adversely affected by the uncontrolled opening of new charter schools nearby. (Just this calendar year alone, for instance, thousands of new charter seats in Ward 7 have been approved, without any indication that the student population has grown commensurately; this huge waste of public resources takes a terrible toll on schools and communities.)

What I would like you to do with this information is this:

—If it has not already taken place, immediately communicate with Sousa and its feeders the clear plan for the school that is indicated in that DME note.

—Immediately communicate that plan with your ward, its neighborhoods, and its citizens.

—At all stages of those meetings and communications, get feedback from the public–and use it to inform whatever plans are being made for Sousa.

—Put all that information on the DCPS Sousa website and on the My School DC site. If our city values school choice like it says it does, why is this future plan for Sousa mentioned only on the DME’s website in a footnote? The lottery opens in December. Don’t parents have a right to know about this NOW?

—Have a plan in place to ensure that children—kids!—are not ever going to any by right school with what I have seen at Sousa: glass strewn along the driveway (this has been true for at least a month where a gym window was broken); trash strewn along the back side of the building; no attractive play areas; and unused garden boxes (the ones at Sousa are filled with weeds).

—If optimizing unused school space is a priority for DCPS and/or Ward 7, communicate that immediately to all communities affected and get feedback on it with regard to Sousa. Having seen the Ward 7 community rally around re-opening the closed Winston and Fletcher-Johnson DCPS schools, I can assure you that there are lots of people right now in Ward 7 who have very good ideas about how to use public space there–and, amazingly, none involve charter schools! I have copied some of them here on this email.

Thank you for your efforts, and please do not hesitate to contact me should you have any questions. 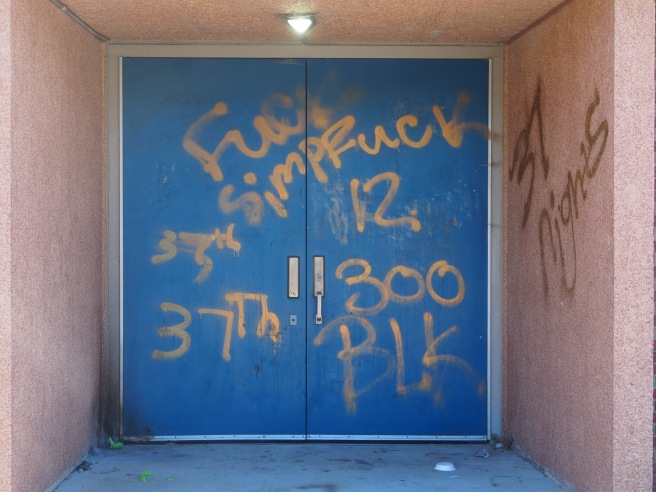 Second picture: Abandoned cafeteria, Sousa Middle School. What appears to be a pool of standing water can be seen by the door; in the foreground, another pool of liquid appears to have dried up. I have seen such pools of liquid (presumably water) on the floor of this room for more than a year. Taken September 30, 2017. 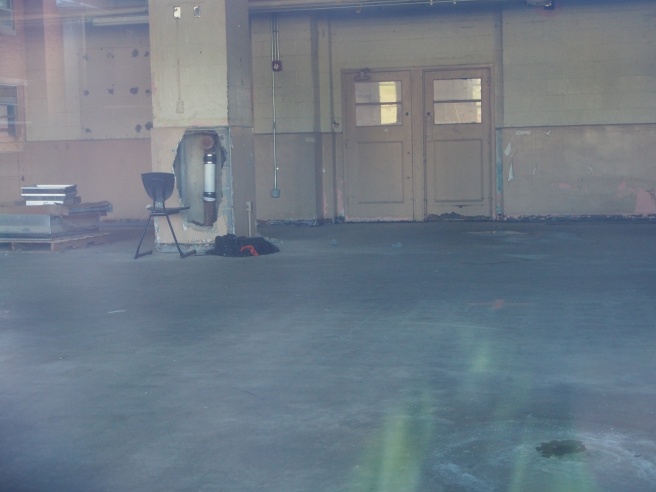